The Federated Garden Circles of Ft. Lauderdale, Inc.,
with the help of L. Thomas Chancey,  is
Instrumental in preserving The Annie Beck Tree 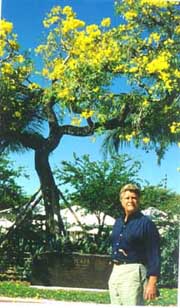 The Annie Beck Tree in all her Golden Glory!
Rose Butman Returned to the site on April 23, 1999 to photograph the tree along with the L. Thomas Chancey, who has monitored the progress of the tree from it's original move to its present state.  Read the story below:

When Fort Lauderdale pioneer Annie Beck planted a seedling in front of her home 60 years ago, she laid the foundation for a local landmark.  Beck's silver trumpet tree (Tabebuia caraiba)bloomed and shed its golden flowers over the years, growing to 25 feet and outlasting both the Federated Garden Club (FGC) founding member and her house. This harbinger of spring with butter-yellow flowers has survived hurricanes, but it might not have withstood redevelopment without the dedication and devotion of the Garden Club.  Civic Improvement Chairman, Rose-Bechard Butman and Ann Schandelmayer, Tree Chairman, spent endless hours working to save the tree ( as well as being there from 8 am to 5 pm they day it was moved.)

We applaud their efforts and the work of their committee and we salute L. Thomas Chancey, Certified Arborist extraordinaire! No one involved in this effort has done more or worked harder than L. Thomas Chancey, who on the behest of the FGC donated his time to prepare the tree for the move and continues to monitor its progress.  Mr. Chancey stated, " Basically, I want to ensure that the tree makes the move with dignity".  Dignity, Mr. Chancey is what YOU have!

The Story according to Rose....
The Federated Garden Circles were represented by the Civic Improvement Committee at a  City Council Meeting in Ft. Lauderdale regarding the moving of the Tabebuia at 333 East Las Olas Blvd.  Rose Bechard-Butman and Ann Schandelmayer both spoke of concern over the moving of this historic tree.

Primarily we would have liked to have seen it remain at its historic location. However, given the current circumstances around its location, and the on going development of the project, the FGC was supportive of the tree being moved  to the new DDA Plaza.

The FGC had worked with the DDA when they donated  twelve flowering trees to the new park on Las Olas. The trees represent  the different circles within the Federation  and marked our 70th anniversary. We have placed botanical signage for each of these trees along with the name of each circle. It seems quite fitting that the Annie Beck Tree, planted by one of the co-founders of our Federation,  join the these other trees.. The close proximity to its original site and the ease of transporting the short distance also seemed  fortunate.

Our primary concern was the survival of the tree. We were supportive of this move provided each phase of its preparation was monitored by L.Thomas Chancey, Certified Arborist. It was our understanding that Mr. Chancey will designate the appropriate timing of rootpruning, fertilization, crown pruning and destination site preparation. We have been assured by Mr. Chancey that he will personally supervise each phase as a donation to the Community. Given his credentials and his commitment to conservation, we were happy with this provision.

We were pleased that Stiles Corporation was willing to cooperate with our efforts to preserve such a valued tree. We are also pleased with their offering to provide a dedication plaque identifying the tree at its new location.

Details of the Move 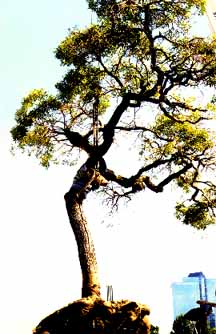 In November of 1997 the task of beginning preparations for the move of this Old Historic Tree was undertaken by L.Thomas Chancey, Certified Arborist at the behest of the Federated Garden Circles of Fort Lauderdale, Inc. and the Mayor, Jim Naugle & City Commissioners. Given the age of the tree, location and existing soil conditions, it was necessary to first make certain that the tree was protected from the beginning  construction work and amply irrigated.

Mr. Chancey began by removing all dead wood, stubs and ragged cuts from the tree’s canopy. A root zone injection of organic composted nutrients was mixed for the specific site conditions and applied to the root zone. The tree’s immediate root zone area was weeded and mulched with low ph bark compost. Hand root pruning was done on the north side of the tree. It was necessary to chip away at the existing coral rock that the tree roots were imbedded To avoid ripping them at a future time. Aged chips, shavings mixed with organic fertilizers were added. The tree was irrigated daily and personally checked by Mr. Chancey weekly through its blooming season.

After new leaf flush in April of 1998, the south side of the tree was hand rootpruned as the north. Two columns were left for support. All caverns around the root zone were filled in. In May, the tree was redug and he continued to chip away at the coral rock. The tree was carefully pruned to remove all but 4 or 5 anchor roots. This digging pruning & filling procedure was done again along with the fertilization application each time the roots were pruned.

The tree was monitored daily until the middle of June, at which time the last section of root zone was addressed. The last remaining supporting surface root was cut. A daily watering schedule continued and an application of mycorizzee inoculant was applied. New root growth was carefully monitored to determine the appropriate time for the eventual transplant date of the tree.

Two days before the transplant date of Saturday July 25th, 1998, the tree had a number of it’s leaves removed.    At that time the last of the anchor roots were cut. A hole was drilled through the trunk of the tree and a tempered steel rod was inserted.  The rod was used to lift the tree to avoid tearing the bark of the tree.

A plaque will be placed by The Stiles Corporation  which will identify the historic tree in it’s new location.  Mr. Chancey will continue to monitor the trees progress.


A Special Thanks to:
Molly Hennessy-Fiske of the Miami Herald
Robin Benedick, Tessie Bordon, and Diego Bunuel of the Sun Sentinel
for the excellent coverage they gave this historic event.

Cal Deal wrote the following article for The FortLauderdaleObserver.com
Reprinted with his permission.


Go to: The Florida Federation of Garden Clubs Home Page

Visit My Garden
Return to my Home Page